The Oshima Triathlon was held on June 10 this year. I have a total of 6 times of participation. Since I participated in the 2017 tournament, I will introduce the race report and features of the convention with photos.

Izu Oshima (Oshima) is a remote island located about 5 hours by ferry from Tokyo and about 2 hours by a high speed jet ship.

It is possible to go from Takeshiba pier in Tokyo and Osanbashi in Yokohama to Oshima.

Oshima is a volcanic island, and there are many records of eruptions from Mihara Mountain located in the center in the past.

Also, Mihara has a goddess of Godzilla, “Godzilla dropped in the crater of Mt. Mihara has become unknown.”

Therefore, there are opportunities to see Godzilla’s stone statues frequently in the island. 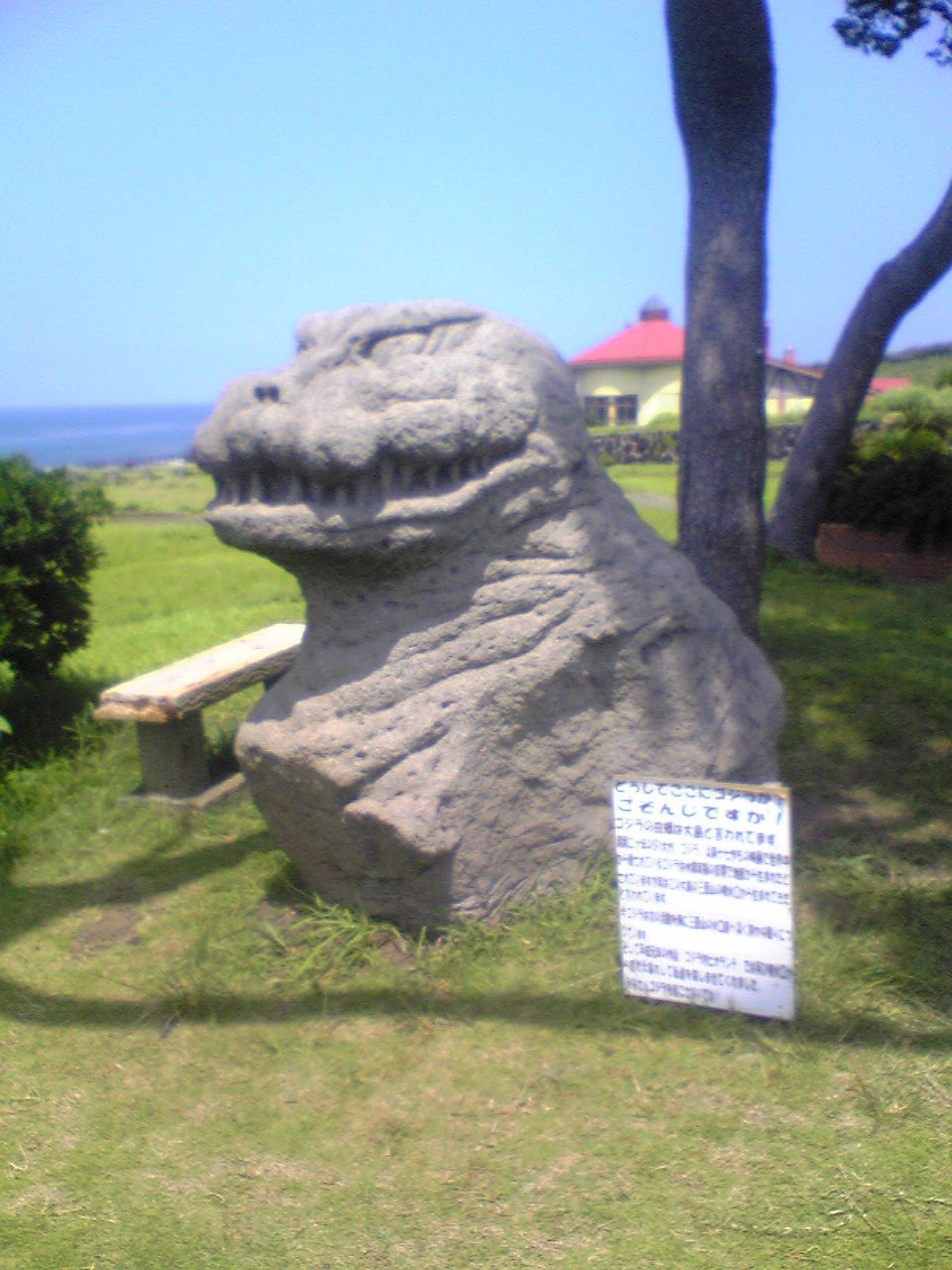 As a famous sightseeing spot, 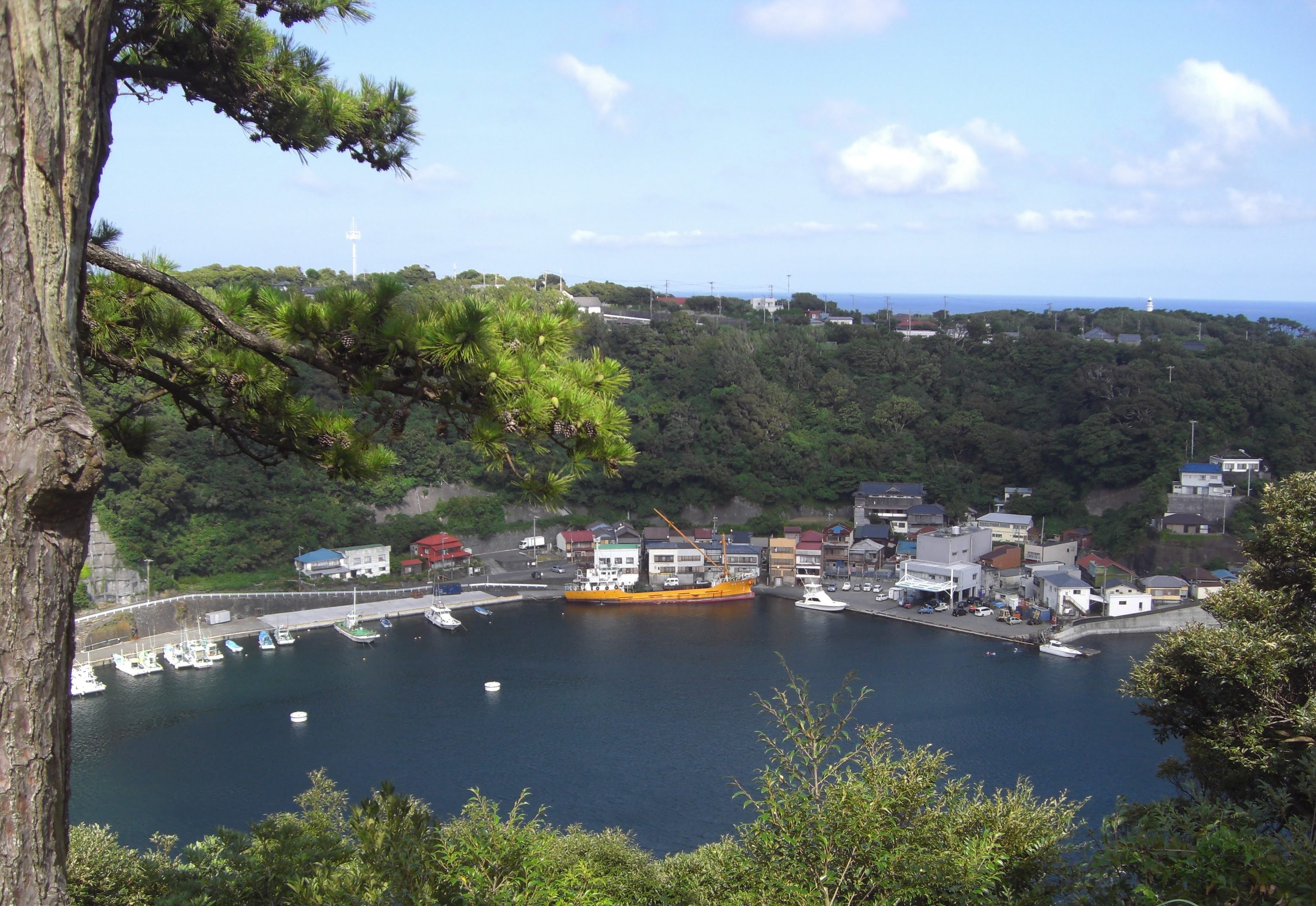 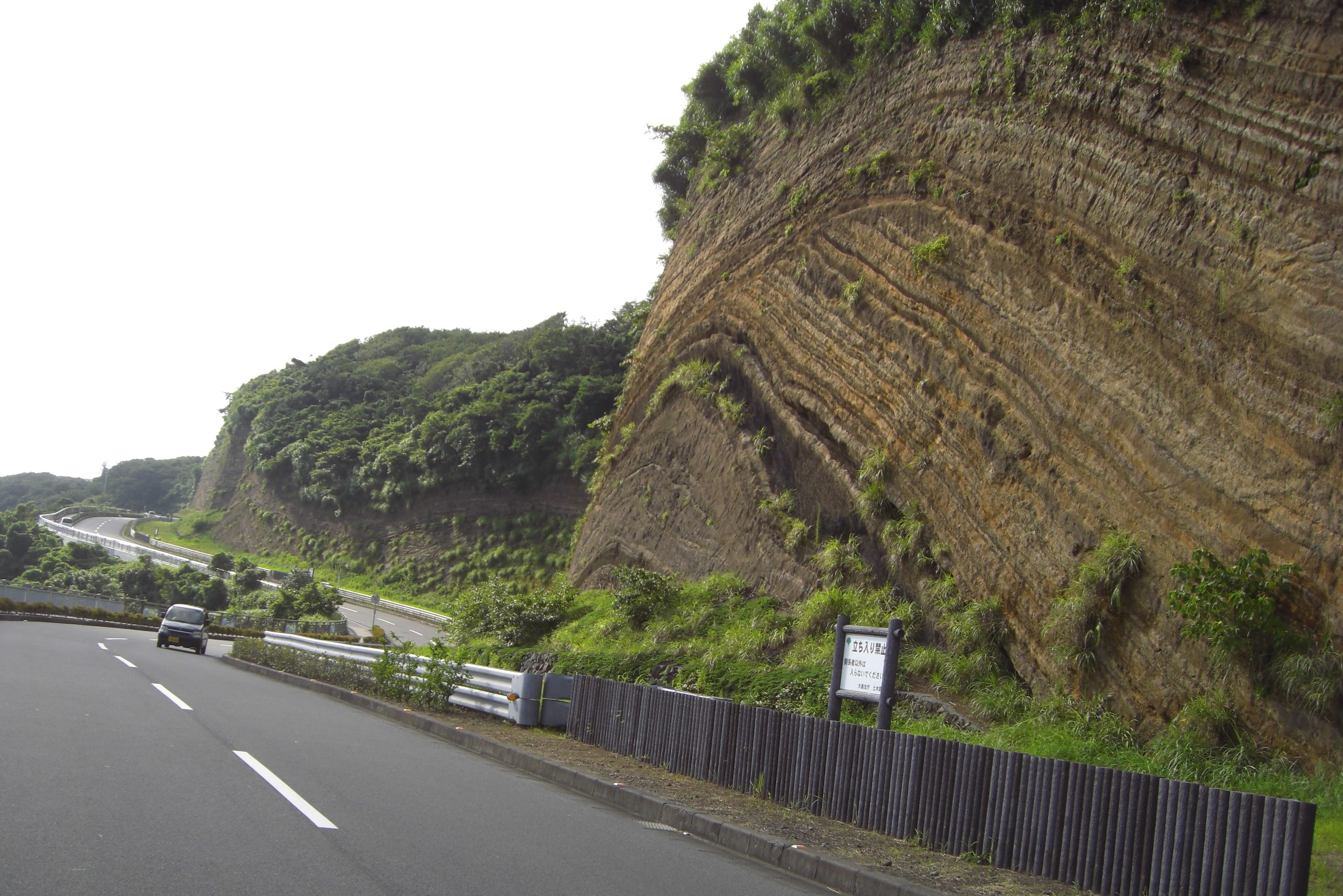 Characteristics of the Oshima Triathlon Tokyo

There are three main features of this competition. 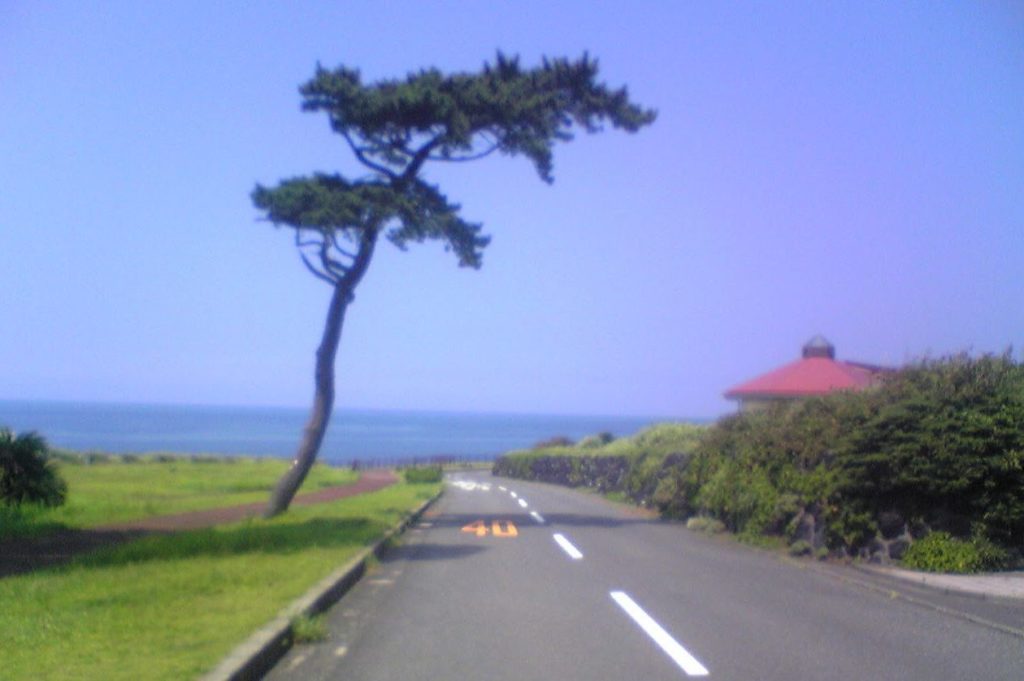 The coastline, a bicycle course, runs straight through the coastline and is a straight course backing back by 180 °. So, the influence of the wind is opposite in return and on the way home. The island wind is strong and we need power in the bike part.

Also, as typhoons occur frequently in June, it is very rare that the swim is gone and the race content is Duaslon (run 5 km → bike 40 km → run 10 km).

I have participated six times in the past, had a blessing of the weather and only triathlon was made once (LOL).

So we encourage you to participate after participating in “anticipate that you may become a dualist”.

And a party will be held after the race. There, beer and others are played with the performances of “Okami Fire drum” by the people of Oshima and a number of famous products of the island such as “Bekko sushi” and “Kusaya”.

The finishers of the race work at each other at this party, and winners’ awards ceremony will be held. At the ceremony, you can also enjoy the japanese traditional drums called “Taiko“. 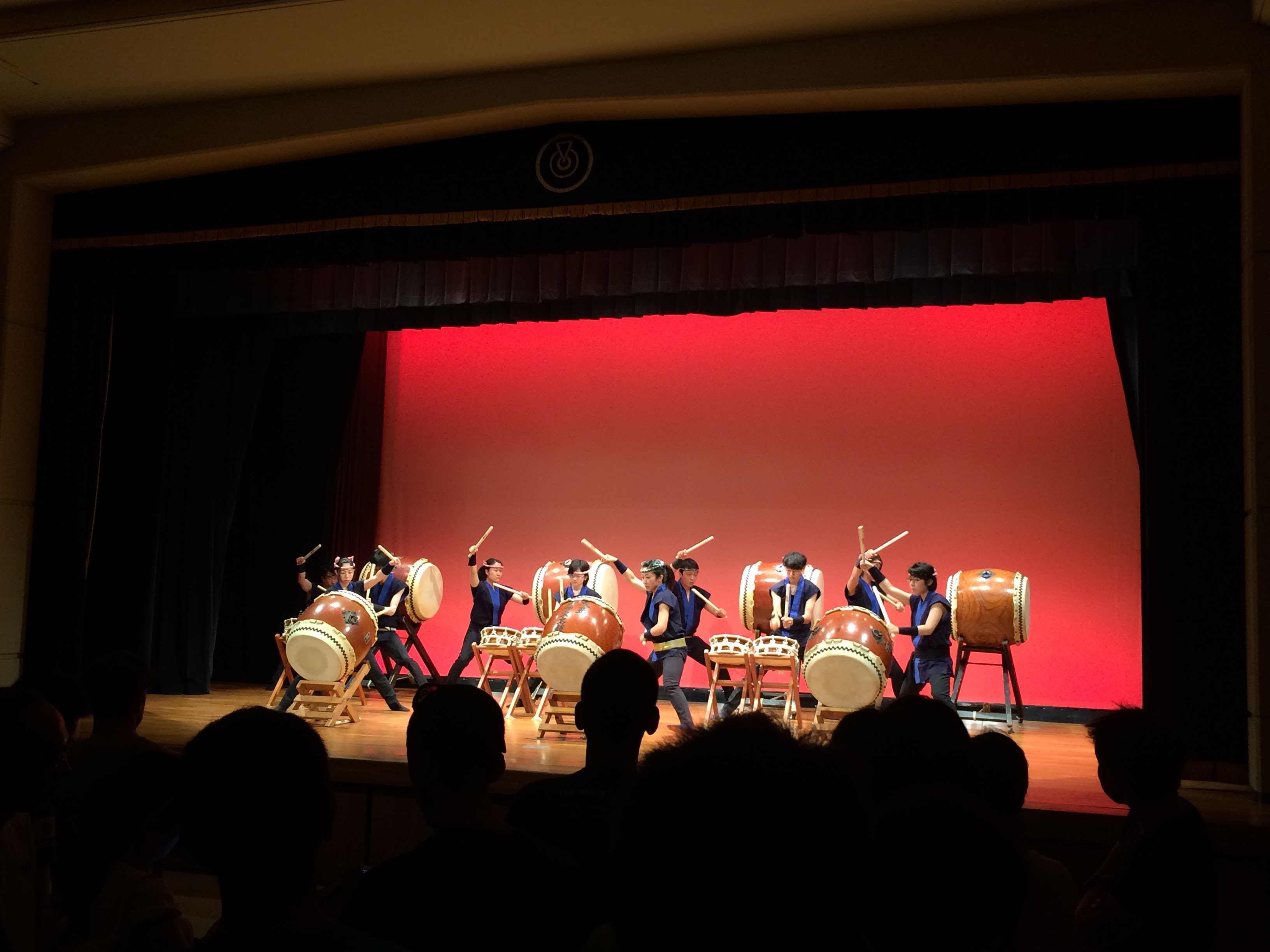 [Performance of the Godfire Taiko]

The course map of this event is shown below. 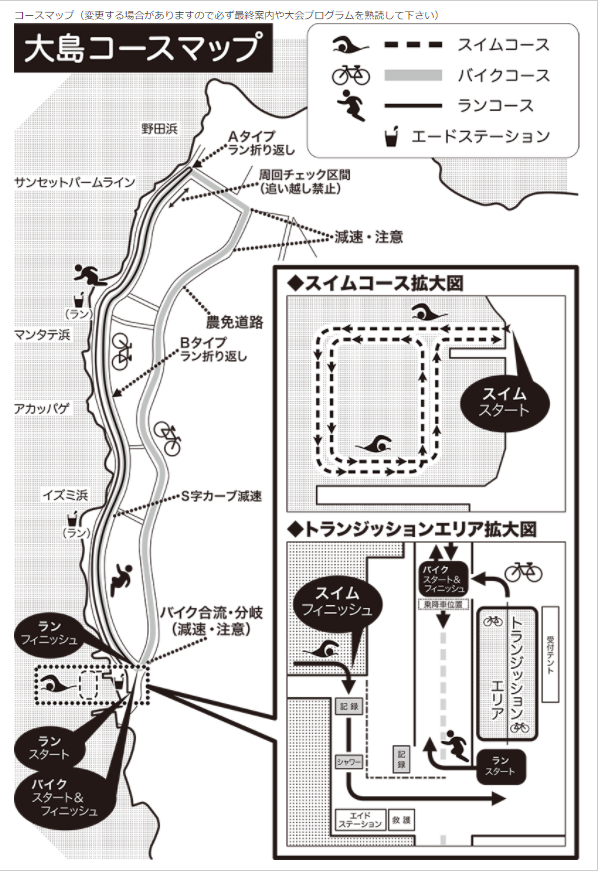 The swim course is a two-lap course with a space next to Honcho Port.

Oshima water has high transparency, so it seems that it can be seen to the bottom so I think that there is no problem of visibility.

Water temperature varies depending on weather conditions, but it is around 20 degrees Celsius so most participants are wearing a wet suit.

As the only point of caution, pay attention to your feet as rocks with a big bottom at the time of swim start and swim up are rolling.

For your information, there are places where you can go up in a slope shape on both walls of the swim start and swim up place, so there is little worry of injuring your feet if you use it.

The bike course is 10 km x 4 laps. Going running all the way along the coastline, after returning you run a road sandwiched between private houses and fields.

Half of the coastline (2.5 km from the start) has a somewhat sloping climb, but basically it is a flat and easy-to-run course except there.

The point to watch out for is the strength and direction of the wind, and in the case of the wind blowing it is possible to run at a cruising speed exceeding 45 km / h, but at 25 km / h on the headwind it may be a race expansion both extremes.

The run course is one round trip to the coastline that ran in the motorcycle course.

Unlike the course of motorcycles, the run course has some undulations, and the road width is also narrow, so you need to be careful when running in groups.

As a precaution, it is 8 km from the return run.

There is a similar scene like mistaking this goal, so be careful not to put on the last sprint there.

Spurt is a point where the point where you heard the actual condition of the goal point is a standard.

My Race development in 2017

In this year’s race, the swim was canceled due to the high wave caused by the strong wind and it became a Duaslon style.

At this point, as I was putting emphasis on the swim I could not read it. If it is Duaslon, there is no swim, so many players who participate in bike wear, not tri wear, saw a lot.

In the 1st run, the intention of running at my own pace is caught up in the surrounding high pace, and the pace goes up naturally. We will have a transition at 30th overall position.

In the motorcycle part, we were able to ride smoothly with the tailwind on the coastline. However, on the return route, it will be hard to get speed and go on enduring the 5 km road.

When the third raps approached the end, the calves on both legs were puffed down and paced down. I was so tired in 1st run, and I had not trained enough.

In the last 2nd run, the legs were still pissed off, but we slowed our feet gradually by not making a burden on the feet by the small runs method.

However, there is only water for this event. There are neither sports drink nor candy.

I was accustomed to the richness of the Aid of the marathon tournament, completely forgetting the triad of Aid and going into a hanger knock state.

5 km on the way back from the run aimed for a finish by walking because of the state of low energy.

I managed to finish goal while seriously worried whether to eat supplementary food dropped by other players or grass of the roadside in the middle.

In general, I saw this race sweetly.

Compared to long distance races such as Ultramarathon, triathlon is a reflection point not having prepaid supplementary meal by myself because it is not enough to practice by enlarging the high when it is over two and a half hours.

Oshima is beautiful place, and near from Tokyo. You can enjoy exciting race and also enjoy the fresh japanese foods, “sashimi” and some seafood dishes.

I’m sure that you can enjoy this Oshima nature and triathlon.

This time I will introduce the course and features of "1st Nikko Ultra...