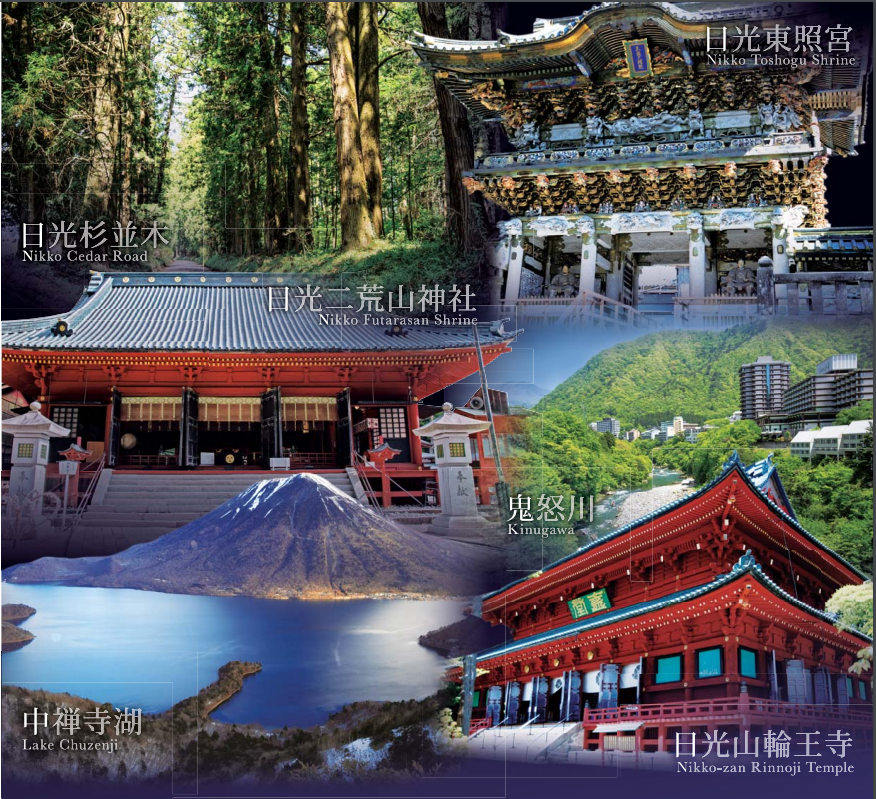 One of the most famous characteristics of this competition is originality of its running course. All runners can run through the traditional and famous Nikko city.

“Nikko Toshogu Shrine” famous for sleeping cats and 3 monkeys, “Kegon Falls”, “Lake Chuzenji”, as if the time slipped in the Edo period “Nikko Edo village”, demon stairs of heart breaking “Kinugawa Onsen(Hot spring) Township”.
By incorporating these sights into the course and AID location, it is such a tournament that makes me “sightseeing in Nikko” while participate the marathon race.
Besides, this was the first memorial tournament.

The course is as follows.

The tournament is set for 100 km part and 62.195 km part, and each have different course.
I participated in the 100 km section, only 100 km part participants can run “Iroha Saka” or “Kegon Waterfall” .

The privilege of the Nikko Ultramarathon 100 km section, Iloha Zaka 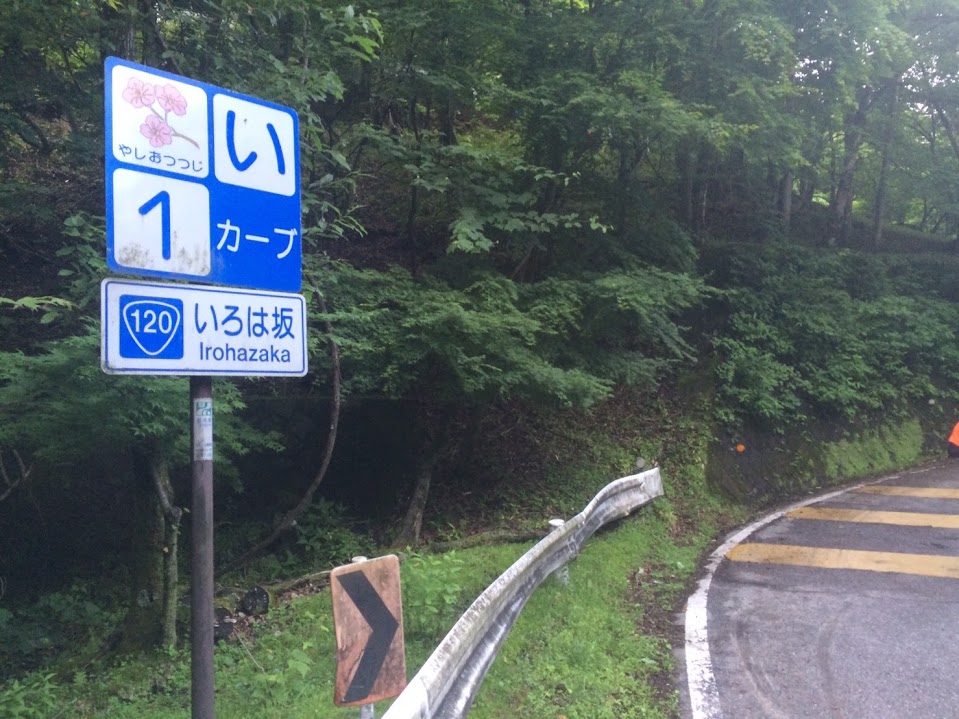 It is supposed to be outrageous for high and low charts as you run through Iroha Zaka slope. It is a course that seems to be a heavy burden on the feet that climbs as far as the 30 km point of the first half of the race and descends gradually to the 60 km point.

It was the descent of Iroha Zaka that was more tiring than climbing. In addition to being a sharp gradient, it was necessary to apply brakes many times to kill the speed.  The momentum with a continuous hairpin curve, which resulted in damage to the foot more than my expected.

Also, because the car is also a lane, as long as you are running in the in-course side to make a shortcut, it can be an oncoming car and a near miss.

Especially, the race is also 30 km, after 40 km it is 8 o’clock since 4 hours since the start so some people need to be careful not to run while being attacked by drowsiness.

If it goes down to a certain extent beyond the tough Iroha Zaka, there is a pickup point of luggage at just halfway point.

Usually, even the other Ultramarathon have a pick up points at about 50 km. Some tournament set a second pick up point at 75 km. This place is where you can pick up your belongings which you left before the start, we will refill supplementary food and change clothes. and you can also send some unnecessary luggage.

This system is one of the unique characteristics of the Ultramarathon, I think it would be nice to prepare pickups considering race development.

After going down Iroha zaka, Nikko sightseeing course is Start! 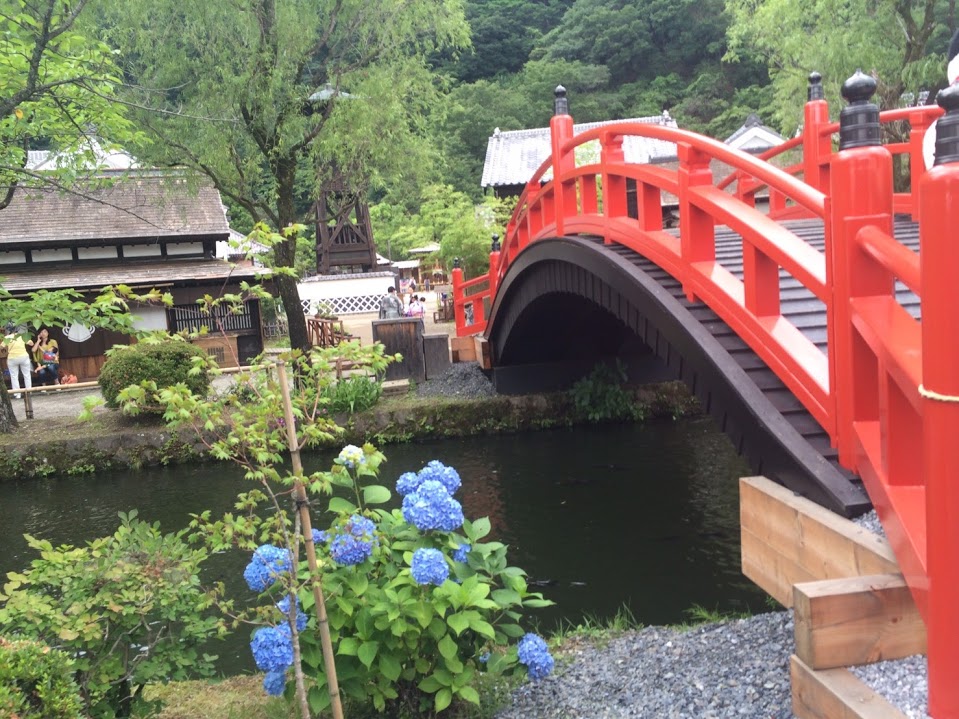 After I went down the Iroha slope, the course was relatively flat and I was able to run well. Although it was an urban area as a course, let me feel history of traditional city. Also, there was a Japanese monkey in the city area. What’s a funny Nikko!

Between the Third Gate and the Fifth Gate, there are many sightseeing spots. At “Nikko Edo Village” you can see a lot of beautiful japanese garden and Samurai, Kimono Lady. At “Kinugawa hot spring town”, there is an unbelievable scene in “Fureai Bridge”! Many runners climbed despairing desperate stairs. In “Tobu World Square”, I ran across the miniature city and took the aid in front of the pyramid and the Empire State Building.

It was an interesting idea that I could not experience in other marathon competitions in such a course that I forgot when it was a tournament and which country’s tournament. 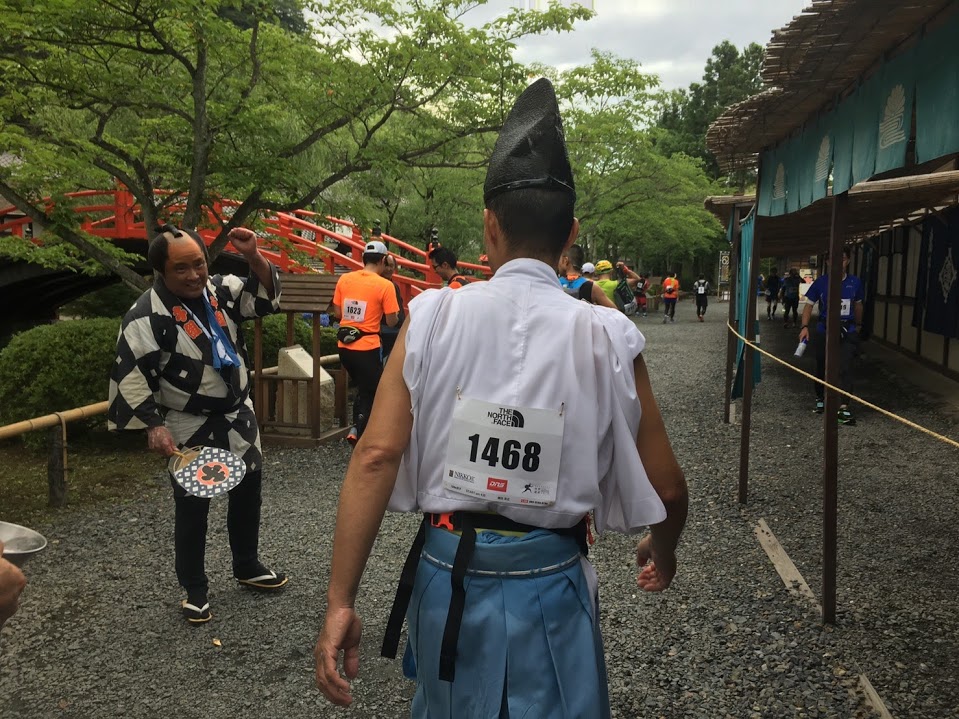 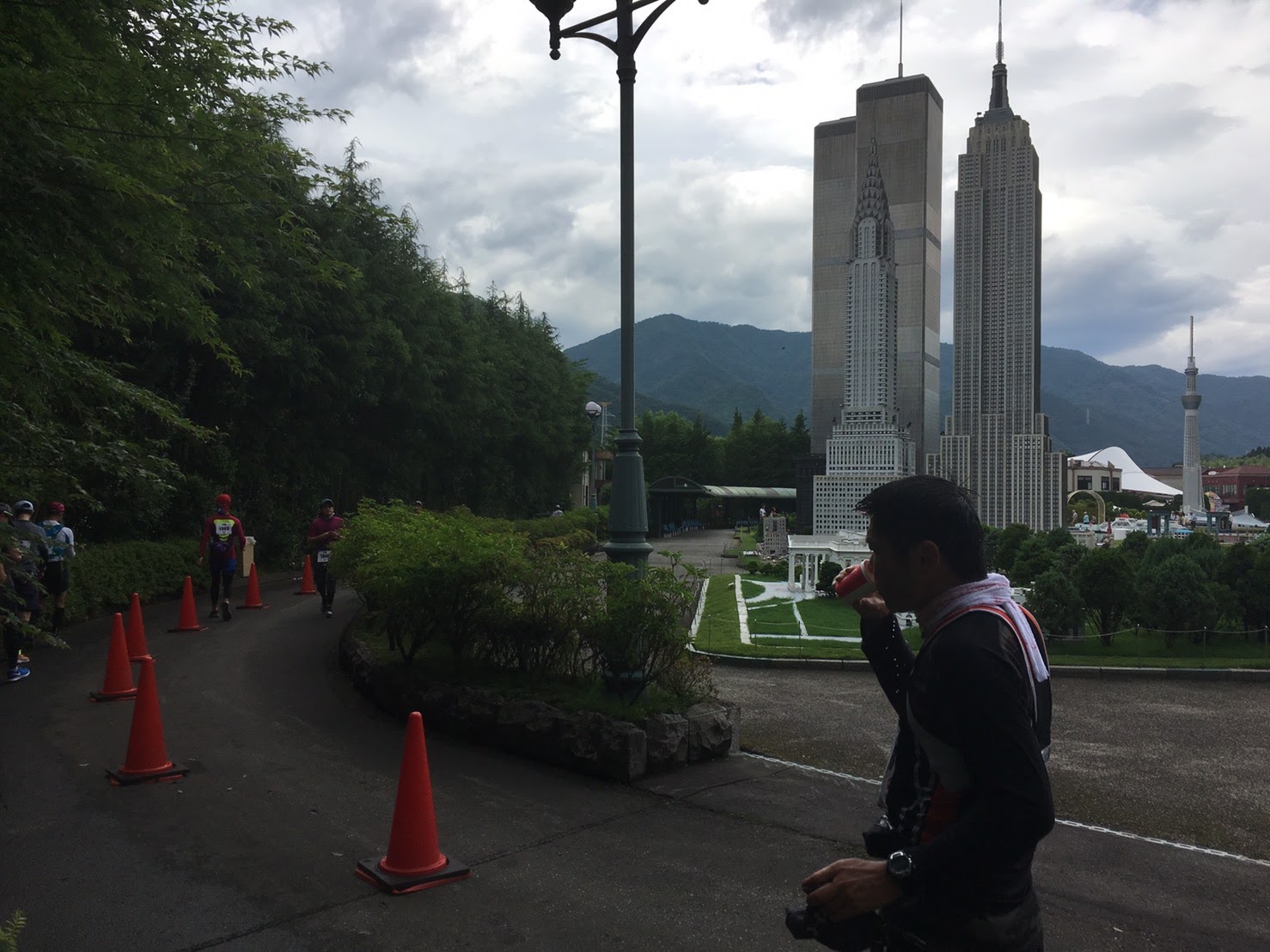 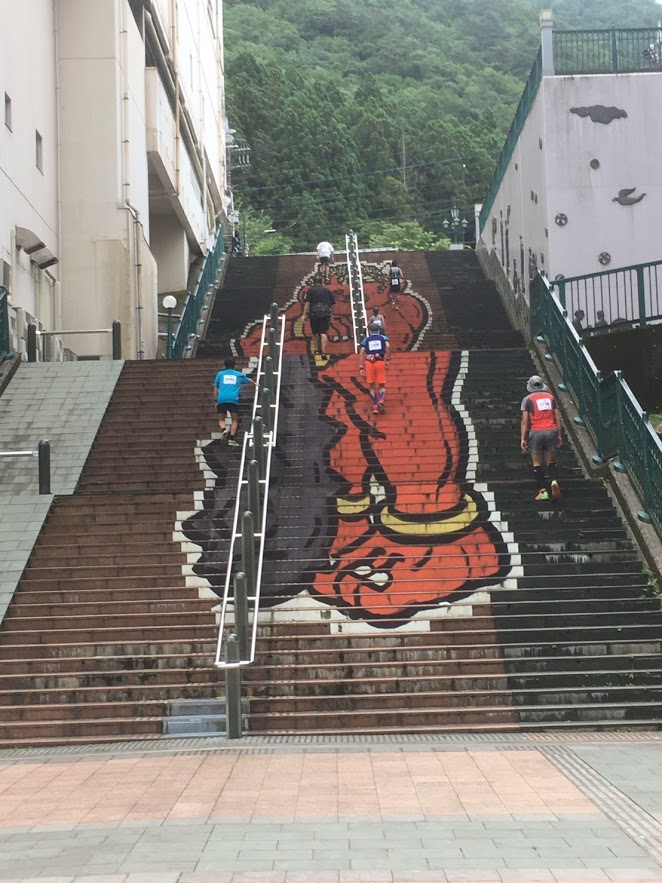 Kinugawa Onsen Town “At 70 km point, “Runner has no choice but to laugh!”

After going around the whole exciting course, we will return to the quiet Nikko road again. Personally, this last 20 to 30 km was psychologically tough with a monotonous path with little change.

There are some small ups and downs even if they do not appear in the high and low maps, and the running feet have stopped every time. Nevertheless, I felt that I was getting close to the goal little by little, and I felt that I could not tolerate that the hardships I ran to this point were in vain.

Finally, it took 13 hours and 20 minutes, and I successfully made a goal!! 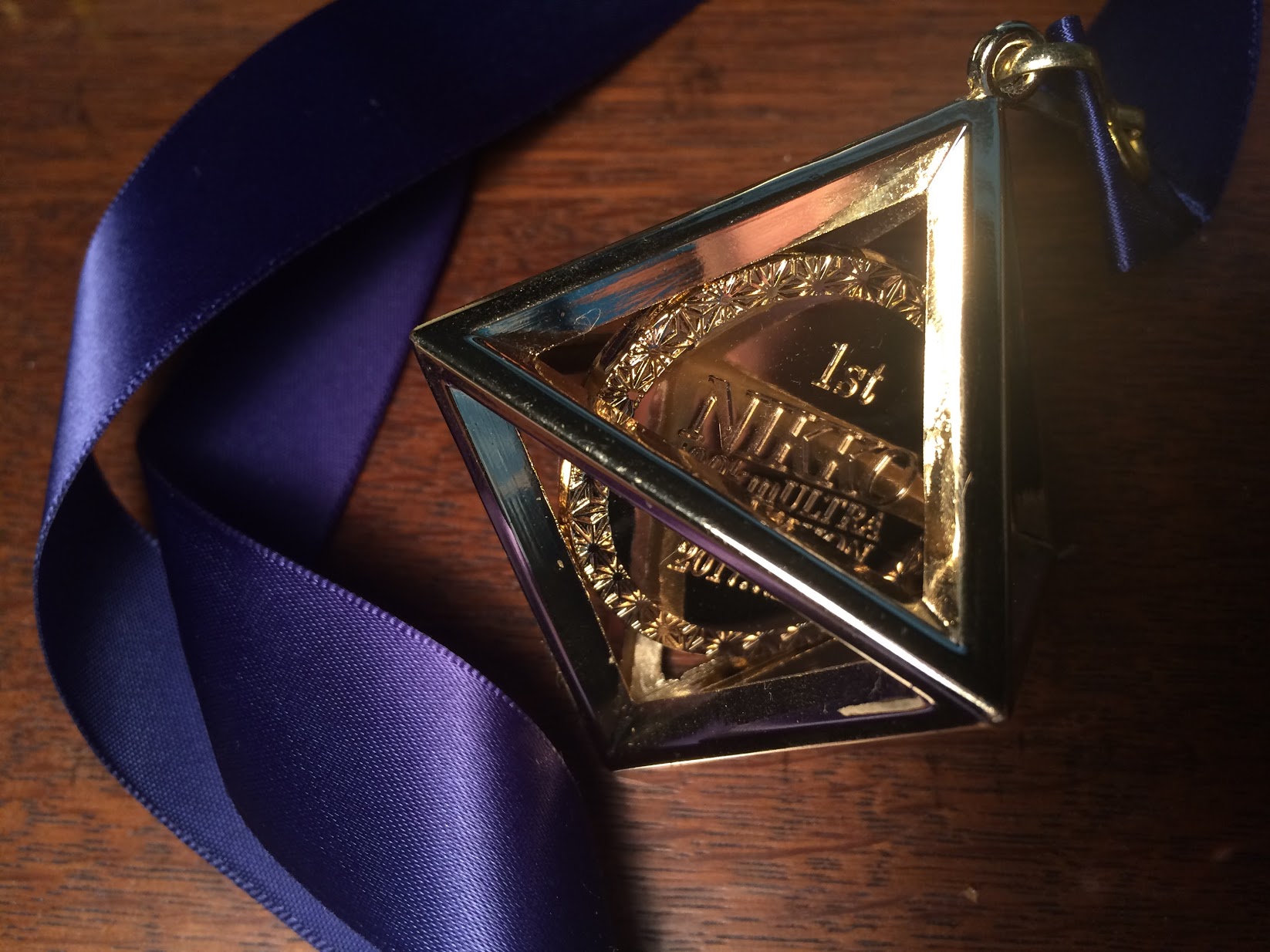 I have never seen this kind of medal. This medal is Gold Octahedron Medal, this is a very unique medal. The character of “1st NIKKO 100km” firmly to the medal !!

It was a long way until I got this medal, so I am soooo impressed!!

This is tremendously pleasing with this, but if you let me feel a bit, I think there is not much characteristics of Nikko. It was personally better to make medals from Nikko sugi, paint Nikko Toshogu or other famous place. This is expected from next time.

In this Ultramarathon, I was suffering from damage to feet on the descent of Iroha slope and drop in body temperature due to cold in the second half. Next time I would like to be conscious of training the muscular strength at the time of going down and keeping the form through downhill exercises.

Also, the competition is so fun to run as the course has been devised! Since it is a relatively convenient tournament access from within Tokyo, how about considering next year’s participation?

You can run through the Japanese traditional, beautiful places with great fun!